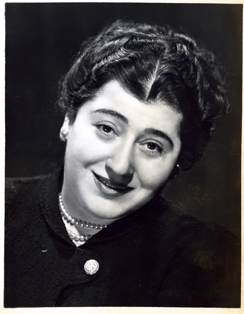 By Susan Kandell Wilkofsky
Quick: Who won the very first Best Actress Emmy in history? I’ll give you a little assistance: The year was 1951. No one comes to mind? Here’s another clue: Eight years later she won a Tony Award as Best Actress (Dramatic) for “A Majority of One.” If you answered Gertrude Berg — you’d be right!
Rarely does a film come along that not only educates but entertains in equal measure.
“Yoo-Hoo, Mrs. Goldberg” is the latest entry from documentary filmmaker Aviva Kempner (“The Life and Times of Hank Greenberg”). Using archival footage from TV’s early days and interviewing family members and celebrities (and a Supreme Court judge), Kempner brings to life the lady who at one time was the most famous woman in America.
For those who were not fortunate to see her TV program in its heyday, she has often been credited with creating TV’s first sitcom, modeled on her radio show “The Rise of the Goldbergs” and character Molly. She not only starred in the radio and TV program, but she was the creator, writer and producer in the day when most moms were stay-at-homes. At a tumultuous time in our history, “Mrs. Goldberg” was a welcome sight in living rooms across the country. Leaning out her window, she welcomed the audience into her world as she talked directly into the camera and later with neighbors in her apartment building. The familiar wail, “Yoo-hoo, Mrs. Goldberg,” beckoned her to the sill, where the friends chatted about life, modeled hats and dispensed advice.
Although she portrayed a blue-collar Jewish matriarch living in the Bronx, she spoke (with an accent) to a country that was communally dealing with the Depression and mitigating family problems. In this sense, the program transcended its religious boundaries and its popularity soared.
I want to thank Ms. Kempner not only for transporting me back to the Bronx, but for re-introducing us all to a woman who may have been temporarily forgotten, but certainly left her mark on our national cultural map.
Once a year, I get to make this proclamation: If you see one documentary this year, “Yoo-Hoo, Mrs. Goldberg” should be the one!

By Susan Kandell Wilkofsky
I was fortunate to get a chance to speak with the director of “Yoo-Hoo, Mrs. Goldberg,” Aviva Kempner. We spoke about the film, the perils of fundraising for documentaries and even a little Jewish geography. Here’s an excerpt.
Susan K. Wilkofsky: I was born and lived in the Tremont section of the Bronx, so thanks for the walk down memory lane. Besides being so entertaining, the film was educational as well. It hit on all cylinders! Thank you.
Aviva Kempner: Ah, my pleasure! Now do you think that folks in Dallas are going to go?
SKW: Absolutely! I’ll tell them to! How did you get involved with Gertrude Berg’s story?
AK: I knew about her; I was trying to figure out what to do next and I went to the Jewish museum. There was a great exhibit called “Jews Entertaining America.” The museum had a re-creation of the Goldbergs’ living room.
SKW: At what point did you read her bio by Glenn Smith, “Something on My Own”?
AK: First I went to the family and they said, “Great!” Then I heard about Glenn Smith and this biography he was doing on her about six months [into the project]. In my little film called “Today I Vote for My Joey,” where the Jews mistakenly vote for Pat Buchanan, I had the character yelling out the window, “Yoo-hoo, let’s go vote!”
SKW: That’s a nice touch! What specifically interested you in Gertrude Berg? The fact that she was an early, visible feminist?
AK: She was so talented. She would get up every morning and write, then go and produce. She developed the most long-lasting positive portrayal of American Jews that you’ll ever see, during the time of the greatest domestic anti-Semitism. Plus, she developed that character that was beloved way beyond the Jewish community, and of a mother figure that she didn’t have in her own life. She [was] the right person at the right time.
SKW: I enjoyed your [documentary] about Hank Greenberg. Many of your films deal with Jews who were heroes in their day and age, but have been somehow forgotten. Can you address that?
AK: It’s bringing up these stories of heroic figures especially at the time of so much domestic anti-Semitism. [They were heroes] in athletic form or in creativity; time passes and people don’t remember heroes past — that’s why I do these films. What’s interesting is there are four bio-flicks out this year about important women around that period: Amelia Earhart, Coco Chanel, Julia Child and Gertrude Berg. It’s wonderful that their stories are coming to the screen.
SKW: It’s interesting that she played a stereotypical Jewish mother on TV and radio, but she wasn’t one in real life.
AK: Exactly!
SKW: Many of your films deal with famous folks who include the name “Berg.” Who’s next — Ingrid Bergman?
AK (laughing heartily): Want to hear the best story? I went to interview Justice Ginsburg and the first thing I said to her was, “You know I’ve done Greenberg and now Goldberg. Maybe I should do Ginsburg … sounds like a Jewish law firm.”
SKW (also laughing): Seriously, what’s your next project?
AK: There was a very famous Jewish philanthropist named Julius Rosenwald who championed Booker T. Washington’s project and together they built over 5,000 schools in the rural South. It’s a great black/Jewish story.
SKW: I look forward to learning about the next unsung hero.

Shalom From the Shabbat Lady

Thousands of people on street celebrate the football victory