Congregation Beth Shalom in Arlington held its annual meeting on Wednesday, Dec. 29, and the sanctuary was filled with members whose interest was piqued by the e-mail subject line of “good news to share.” The meeting was emotionally charged by passionate pleas for members to get involved and participate, and when the incomplete slate of officers was announced and people were challenged, it didn’t take long for members to volunteer to fill those vacant positions.
The good news that was shared was that the synagogue’s mortgage was paid off in full and there will no longer be mortgage payments to make, which is a great boon to the budget! When Past President Barry Schneider saw the vision several years ago to be “Free in Three,” he might not have realized that it would take a couple of years longer than that, but certainly he and the following president, Stuart Snow, saw the rainbow on the horizon. Now under the leadership of President Barry Goldfarb, that dream was realized.
Another highlight of the evening was the presentation of the Congregant of the Year award that was given to well-deserving Randy San Antonio. A lovely reception was held in Randy’s honor in the social hall following the meeting.
Also acknowledged was Janet Aaronson, who after nearly 23 years of service has retired from her position of executive director. Linda Seward, who is now the administrative assistant, was introduced to the congregation.
A special thank-you to Lynda Friedensohn for preparing a fabulous dinner prior to the meeting and to all who assisted her. 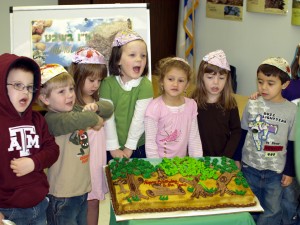 The Lil Goldman Early Learning Center celebrated Tu B’Shevat with cake and an educational presentation from the North Central Texas Council of Governments (NCTCOG). Lil Goldman’s been going green with recycling efforts for a few years, and the presenters from NCTCOG gave a wonderful, kid-friendly presentation on how to keep the air clean. Each preschooler went home with information about clean air and conservation, packed in a reusable lunch tote, courtesy of the NCTCOG. The presentation supplements the fundraising efforts by each classroom for the Jewish National Fund, turning pennies and change into trees to help reforest Mt. Carmel.

‘Watchdog’ to speak on avoiding scams

JWI, Jewish Women International, will host Dave Lieber, the watchdog investigative journalist for the Fort Worth Star-Telegram, on Wednesday, Feb. 2, at 10:15 a.m. at Beth-El Congregation, 4900 Briarhaven Road, Fort Worth. The subject is how seniors can avoid scamming.