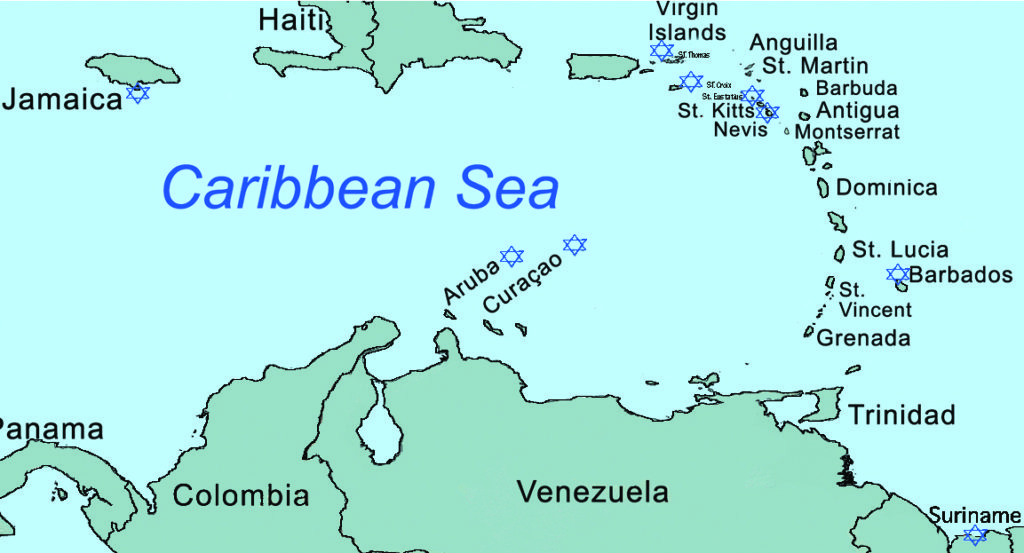 Just about everyone enjoys going on a treasure hunt. So if you’re Jewish and possibly thinking of a future cruise, why not plan a trip to the Caribbean which includes stops at one or more of nine Jewish “treasure” locations?
Unlike the storied pirate’s treasure of chests overflowing with shining gold coins, brilliant gems and jewelry, you will find instead evidence of what remains, including cemeteries and synagogues, of the earliest Jews of the Americas, the “New World.”
As a result of the forced conversions and expulsion of Jews from Spain and Portugal starting in 1492, many Jewish families migrated to the new world of the Americas, searching for religious and economic freedom. My wife and I recently returned from a cruise which included a stop at one of those Caribbean islands of Jewish refuge. Originally colonized by Denmark, Saint Thomas was sold to the United States in 1917 for $25 million.
Opting out of the cruise company’s excursions in St. Thomas, which included “swimming with the sharks” (who needs such excitement?), we instead took a short cab ride to the front entrance of the beautiful St. Thomas Synagogue, rebuilt in 1833.
Unlike our first visit many years ago when we found it open, but dark and unattended, there was a friendly and informative congregant-volunteer. The beautiful hanging lights were aglow as we received a very informative tour.
Like our first visit, the floor was covered in sand. We were informed that the sand floor tended to muffle the voices, lessening the volume of interior sounds which might be heard outside the building.
While in their little gift shop next door, I read a flier about a young photographer who was traveling the Caribbean, visiting and photographing locations of the earliest Jewish settlements, buildings and cemeteries, of which St. Thomas was one.
I wished that our ship would also be visiting those other Jewish heritage sites, but no such luck. Instead, I would have to contend with doing the necessary research after we got back to Dallas.
To my pleasurable surprise as I searched for information on the “Jewish Caribbean,” I found that the photographer I had read about in the St. Thomas Synagogue’s gift shop had indeed completed his project and with the aid of two highly qualified historians of Jewish history, had recently published the results of his Caribbean photographic “treasure hunt.”
The book, Jewish Treasures of the Caribbean, The Legacy of Judaism in the New World, by Wyatt Gallery, is newly available at the Tycher Library at the Dallas JCC.
The Jewish historical treasure locations can be found in Curacao, Aruba, Suriname, Barbados, Jamaica, Nevis, St. Thomas and St. Croix. Some of their cemeteries and structures are deteriorating and in need of care, protection and supervision.
According to Wyatt Gallery, as evidenced by some of his photographs, a number of sites are deteriorating, are unsupervised because of a lack of Jewish residents, and — having no protection — are open to weathering, pollution, and possible vandalism.
Before Jews came to colonial America, they pioneered and struggled to make a life in the New World. Take a look at Jewish life in the Caribbean by reading Wyatt Gallery’s excellent photographic history.

What black history means to the Jews

Does history repeat itself? The choice is ours